Contribution of Indian and Western scholars to Pali and so on

in English along with the PPT presentations and Assignments and

The aims and objectives are:

- to see the impact of the Pali language on the regional languages of south India or specially Malayalam.

- to inculcate the interest of Pali learning and Buddhist culture in the academic and social field.

- to spread awareness regarding the role of Dr. Babasaheb Ambedkar in the revival of Buddhism in India.

- to study the contemporary issues in the society in the light of Buddha's Teaching.

Keeping the above objectives in focus the workshop would be designed.

From the responses I can see that people are eager and ready to know more about the language and literature of Buddhism.

Thus taking into consideration the interests of the people in general we should conduct the workshop accordingly.
more of different information, exploration of different ideas of how Buddhism and Pali language was prevalent in south India specially Kerala.

We would be needing simple Pali grammar books for the basic study. i am also preparing the basic information notes which we can give the students in photocopies.

PPTs should be prepared to give information on Buddhist archaeological sites of India. Papers on the topics of contribution of south India to Buddhism is necessary for better understanding.

i am working on these areas. Kindly let me know any topic you think would be of interest to the people, to create more interest in Pali and Buddhist studies.
What is Canonical and Non-canonical Pali Literature.

Introduction: Pali is one of the ancient languages of India and is the MOTHER of most of the languages spoken in India today.
The importance of the Pali language lies in the fact that ‘Pali has protected the buddhavacana- that is the words of the Buddha’- and hence it is called Pali. The name Pali is given to the language in the 5th CE by acariya Buddhaghosa thera, prior to that Pali was known by the name of Magadhi.

As we all know that Buddha used the lingua franca the local language of the people to give the dhamma- the teachings, so that it reaches all.

We have references in the Pali literature where Buddha admonished his disciples who wanted to translate the teachings in the Chandas language, Chandas being the name of Sanskrit prior to its modification by Panini. We thus understand that learning Pali or the original words of the Buddha is more relevant to know the dhamma than the gist of the dhamma through translation.

The traditional learning of Pali is with Pariyatti, Patipatti and Pativedhana, where Pariyatti is listening to the dhamma, reading the books, discussions on the subject and so on, the Patipatti means genuine efforts to walk on the path of the dhamma, that is following the precepts, being aware of oneself through meditational practices and so on and the last is the Pativedhana- which means the experiential knowledge of the teachings of the Buddha, which develops your insight- the Panna.

We donot learn Pali through translation, because no language of the world has the richness or the strength of the words to hold or carry the meanings or experience which the Pali words carry. That is the reason the most of thebuddhavacana cannot be translated in any other language and remains the same in Pali as the Buddha, the Dhamma, the Sangha- the Vipassana and so on.

Introduction to the Pali Language and Literature
Recitation of the Pali suttas
Workshop on Brahmi Script and Pali Language
Relation of Pali language and Buddhist Art and Architecture
Places of Buddhist interest and Buddhist Pilgrimage
Contemporary Issues and the Teachings of the Buddha
Decline and Revival of Buddhism in India
Flower Arrangement and the Teachings of the Buddha.
Buddhist Education and Culture
Dr. Babasaheb Ambedkar and Buddhism

Posted by spiritual dissent at 2:46 PM No comments:

PARTICIPANTS/OBSERVERS OF THE 15-DAY WORKSHOP ON PALI LANGUAGE AND

Details of the Registration Fee:

Rs. 1000/- (Accommodations and food are not included. That can be arranged with reasonable rate on request).

Students and other deserving persons are exempted from paying Fee.

Regular attendance in 15 days is must for participants in Pali language training.
Observers can attend according to their convenience.

Posted by spiritual dissent at 8:50 PM No comments: 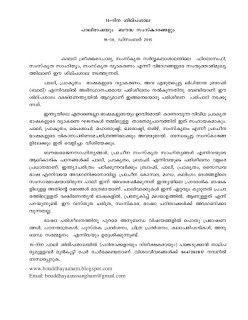 Posted by spiritual dissent at 12:17 AM No comments: 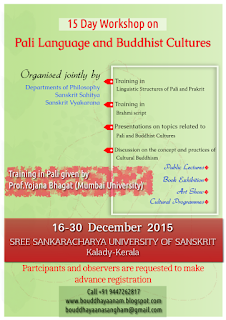 Posted by spiritual dissent at 11:45 PM No comments:


This may be for the first time that a training programme in Pali language is being conducted in in South India. Training in the linguistic structures of the Pali and Prakrit, including the Brahmi script in which these languages were written originally, is the main objective of this workshop. The above languages and script seem to be the major source of almost all languages prevailing in India today.
Training in the basics of the above would provide greater scope for comparative studies of different Pakrit languages. It would also be helpful for the study of evolutionary history of the ancient Indian languages such as Pali, Prakrit, Paisachi, Maharashtri, Gharoshti, Tamil, and Sanskrit. It might be shedding new lights into the cultural dimensions of different linguistic formations in India.
Knowledge in Pali, Prakrit and Brahmi are essential for authentic studies related to Buddhist, Jain and ancient Sankrit literatures. Moreover, those who study the history of India cannot ignore the methodical significance of the above. The Pali was originally a popular tongue of the regions of Ancient Magadha, Kosala, and Kalinga. However, now its remnants are only available as the derivatives retained by the regional spoken languages in India. Researchers have already noted the fact that the presence of the Pali is more apparent in the South Indian languages, especially in Malayalam. This seems to remain a curious factor for scholars and researchers of history, linguistics and culture.
In addition, the linguistic and literary training, public lectures in topics related to Buddhist cultures, field trips, book exhibition, art-show, cultural performance, associated regional meetings etc. could also be part of this cultural endeavor.
Advance registration is required for the participants and observers of the 15-day training programme.
For details:
www.bouddhayaanam.blogspot.com
email: bouddhayaanasangham@gmail.com
Mob: 91-9447262817

Posted by spiritual dissent at 11:41 PM No comments: