Except by politics no language can be presented in its purity. Destabilizing it's unity is a welcome 'minority politics'. Speaking in terms of 'minority politics' is genuinely radical than what lobbies of various identity positions market.....
The enunciative pressures upon the making (variating) languages is worth problematized than associating them with purity of languages or their associative good or badness.

An activism for the recovery of Pali language seems to convey many things. It embodies a cultural politics that emerges from the awareness on historical wars of oppression and marginalization fought by means of language.  Primarily, it has to seek an explanation on why certain people are made forgetful of the tongue in which their ancestors were negotiating with natural and cultural environments for survival of them, including the progenies to come. The present day Kerala had been a region where the tongue Tamil was prevailed for a long time in the history of human civilization. That means, Keralites were too Tamilians as the people of the present Tamil Nadu. Unfortunately, Keralites consider Tamilians are different or rather culturally inferior. If we go further in the history of the sub-continent, we might be able to see a same model of cultural metamorphosis happened to the Dravidian India that is known now in hearsay only.  If Pali and Prakrit were popular tongues, what caused their demise? Asking such questions of cultural and historical justice cannot be branded as identity fanaticism.

1.assuming languages to be pure monads & positioning them as oppressed and oppressor is problematic
2.conspitatory claims of someone deliberately making  forgetful of somebody else's ancestry does not go well with the understanding of the discursive production of language.
3.languages are flows in response to ethologically triggered necessities. No language can remain statically true to its ancestry- because ethological conditions and enunciative necessities don't remain same.

About activism: engineering action against other with claims of justice - I think can't  be authentic activism.

Question of purity of language may not be the present concern. Why do we go after some dead languages and scripts? Why do we struggle to decipher the Indus script? Why the Pali and Prakrit are considered to so valuable? How the recovery Hebru became liberative? There are many factors and conditions which made the demise of languages. Some may be natural and evolutionary.  Others may be created or pressurized. There is a socializing process going on   whereby some tongues are made silent and some others are being made  louder. How could we think of such situations are encouraging?

Activism seems to spring from the space of some common cause that are to be achieved. It may happen in such a way keeping both justice and cruelty in view. In this scheme,  the activism for the recovery of Pali has to be placed in the former side. Pali cannot be the sake of Pali alone

Do you presuppose some conspirators villains work behind the screen consistently for Millenniums to deliberately sabotage goodness of good languages? It is wonderful to study languages and the enunciative struggles or context making,  breaking, diminishing or enhancing them - but a conspiratory presuppositions muddled with current concerns of identity claims spoil the brat. That linearises and flattens history to unjustifiable ideological claims that are methodologically vacuous.

The concerns conveyed by the above questions are to be addressed. Conspiracy may not be the apt term to characterize the forces working to the creation of such situation.  Interests of social and cultural domination are apparently there. They may be in force through economic and political structures.

Problematizing milieus constituting enunciative practices culminating in languages and their signifiers and thereby hierarchising the social world unjustly can be the orientation. That will problematize processes instead playing a identitarian blame games and provocations.

Of course, assertions of cultural rights need not be yet another instance of perpetrating violation or injustice. It may be self defeating. Such provocations might be leading to  misdirect the target. We can very image a situation that the region of Kerala soon witnessing the demise of the Malayalam language and script. Can the possibility of it becoming another linguistic grave yard of the Malayalam be considered as natural and evolutionary?  Who will be the beneficiaries and losers of  such a situation?

Posted by spiritual dissent at 12:39 AM No comments:

A DISCUSSION PROGRAMME AT KOZHIKKODE 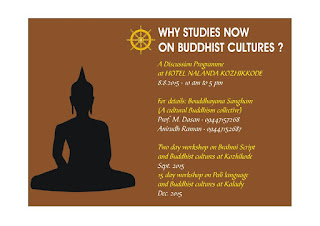 WHY STUDIES NOW ON BUDDHIST CULTURES?

Posted by spiritual dissent at 12:33 AM No comments: